Author of Wildly Successful “The Shack” Writes Sequel, “The Mansion” 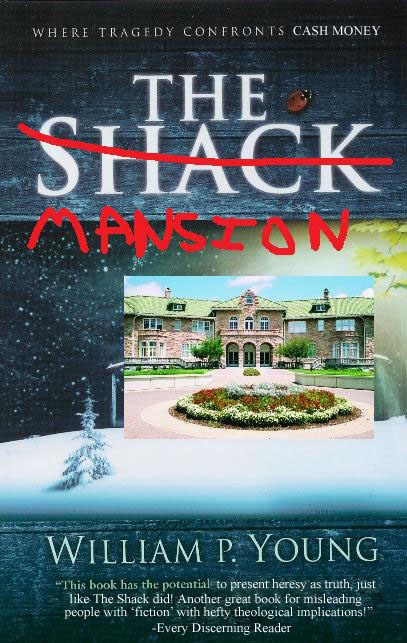 On the verge of the release of the hotly anticipated new installment of the Harry Potter film series comes the announcement of another sequel likely to incite riots and violence amongst rabid crowds of fans. Titled simply The Mansion, this book is the follow up to the break-out theological fiction work The Shack. Following the first book’s successful fulfillment of its ambitious goal to explain God through the main character’s conversation with the Trinity at a shack where his daughter was murdered, The Mansion aims to use a simple narrative to explain the meaning of life.

“You know, when I wrote The Shack, I was just doing my best to explain my thoughts on God to my kids,” author William P. Young told TTM in an informal Gchat interview. “Then one day after I came home from doing a book tour through the Bible Belt, I heard my son listening to one of my personal favorite bands, Creed. He was listening to ‘What’s This Life For?‘ and I decided, you know what son? I’m gonna write a book and tell you.”

Much like his last work, The Mansion is not a work of theology or apologetics. According to  Young, the book is centered around a first time author who experiences quick and unexpected success with his first book, mostly through the guidance of the Trinity. The author had gone through multiple careers, seeking all the while for meaning in what he saw was meaningless. Suddenly after a visit to the mansion, his book – which he intended to write for his children and not for public consumption – lands on a best seller list and he is catapulted from normalcy to spiritual guru.

“The protagonist writes this book right, and then he gets an email from God on his Blackberry and it says ‘go to the mansion.’ This isn’t just any mansion, though; this is the mansion where aliens from the former planet of Pluto probed him and brainwashed him with I Love Lucy episodes,” describes Young via an internet connection from a beach side cabana in the Bahamas. “So he shows up there, and he’s like all emotionally conflicted, and then he gets a voicemail from Jesus that says ‘welcome to your new pad my friend, the pool in the back is heated and the fountain in the foyer is totally filled with Vitamin Water.’ After he cries a bit about how his puppy died at the mansion, he kind of settles in with the $800 Scotch and the Moon Jump room. Then the Trinity shows up to explain the meaning of life to him.”

Readers of The Shack won’t be bored by another featuring of the Trinity, stresses Young. “I went a whole new direction with it this time: God is his Italian chef, the Holy Spirit is his Mexican maid, and Jesus is the Arabic gardener. Anyway, long story short, God tells him to put his book on this magical Holy bookshelf, it gets super popular, cash money rolls in and the author lives happily ever after with his family in the mansion. Boom goes the dynamite, the meaning of life. It’s pretty simple if you think about it, and that’s what I do. I take very complex things and water them down so that they’re easier to swallow.”

Early reviews of the book have questioned its theological substance and validity, criticisms which Young shrugs off. “Look guys, I’m not trying to write a new Bible or something. It’s just a book I wrote for my son that I decided should get published and translated into 15 languages. Take it or leave it. But if you take it – which is probably a good idea, I’m just saying – if you do, you should take the $25.99 hardback version. It’s sturdier.”

Other critics have raised questions about the book’s presentation, wondering why Young doesn’t put a disclaimer about the book’s intended purpose in the preface. “Fiction is fiction. People need to figure that out. It’s just that my fiction explains God and life. That’s all,” said Young, his responses somewhat erratic because, as he told us, he was “munching down this ultra delish [sic] shrimp cocktail and [his] fingers are way dirty!”

Morgan Freeman, an actor who frequently plays God in the flesh, is not a fan of Young’s work. “Mr. Young is clearly ignorant of the true God, since it is obvious from the Scriptures that He looks and sounds like myself or James Earl Jones.”