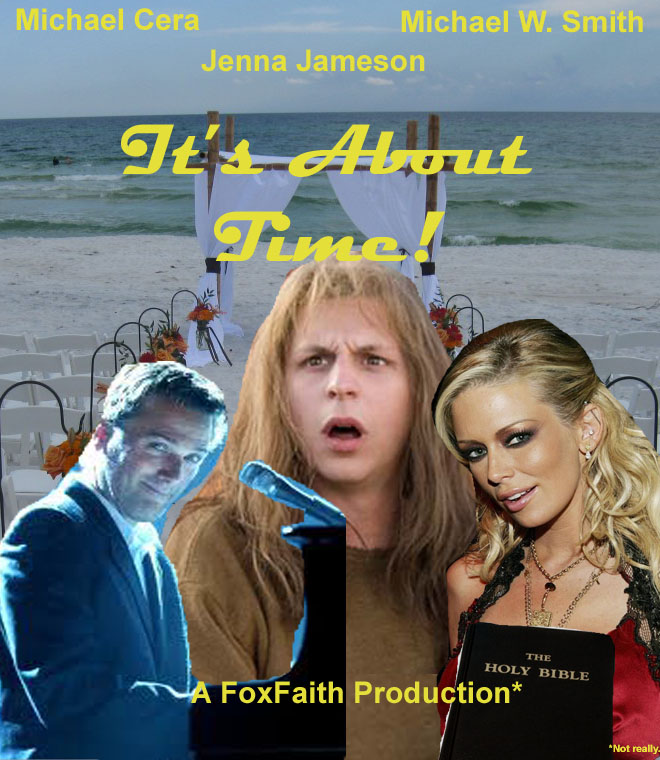 From the people who brought you A Night with the King, and Facing the Giants comes a comedy so groundbreaking, so unlike any Christian movie before it, you’ll actually want to see it!  What Judd Apatow did for the teen sex comedy, It’s About Time!, does for the Christian sex comedy.  It’s wholesome, it’s hilarious, it’s Superbadfor Southern Baptists!

Ruth (Jenna Jameson) and Boaz (Michael Cera) have promised themselves and their Facebook groups to lose their virginity and have torrid sex on their wedding night. They’ve made it through the courtship, through the engagement, and through the Joshua Harris conference, but now they’ll have to make it through the wedding…and what a wedding it will be!  From a unity candle that won’t stay lit to an uncomfortable reading from Song of Solomon, events seem to be conspiring to keep Ruth and Bo from the blessed consummation they have heard so much about on the cover of Cosmopolitan.

When, at long last, the ceremony concludes and the reception begins, the mishaps and mayhem only get worse.  With no alcohol and no dance floor Ruth and Bo thought they were playing it safe and paving the way for a long night of necking and heavy petting.  They didn’t plan on Bo’s best man, Jeremy, having a few too many sparkling grape juices before his toast.  His graphic retelling of Bo’s church camp van encounters throws the assembled guests into fits of indignation.  Relationship Defining Talks and readings of Proverbs 31 ensue.  And that’s only the beginning!

What carnal advice is Ruth’s unsaved grandfather (Michael W. Smith) whispering in her ear?  What PG-13 plans do their friends have for their getaway car decorations? (You can bet there won’t be any prophylactics!)  Will the two ever make it to the Holiday Inn? Will they in fact “do it again and again” like that lady from the abstinence conference said they would?  You’ll have to watch to find out!

This article was brought to us by the honorable and venerable James King, a master of thumb wrestling, Brazilian Jiu Jitsu, and RISK: Lord of the Rings Edition. We’ve made him laugh many times, and now we thank him for returning the favor.