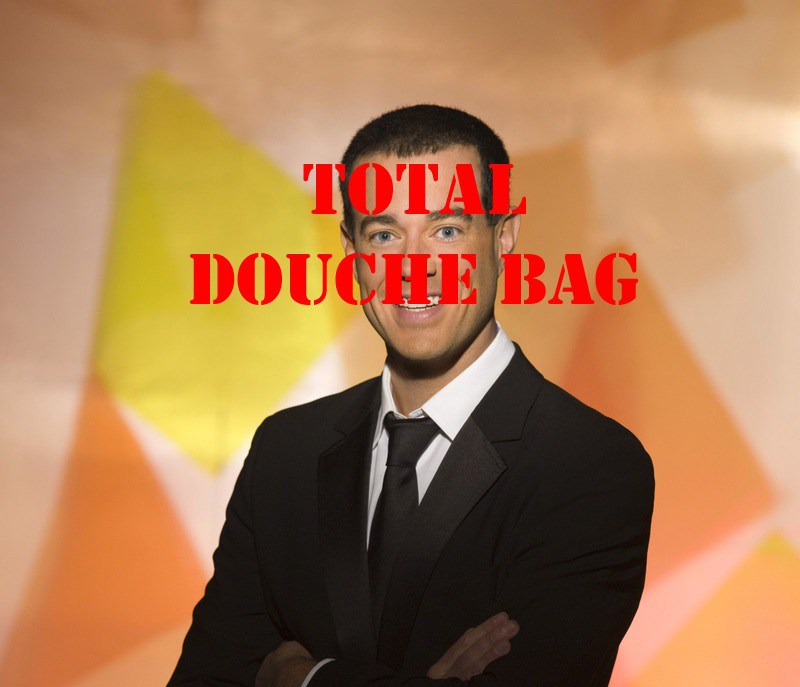 Anyone of my friends will tell you, I’ve hated Carson Daly for a long time. Years. Ever since he brought his doucheyness to national fruition on what has unarguably become America’s incubator for “celebrities” that are actually just awful, skanky people: MTV. If someone ever asks me the question: “Conor, if you could fight anyone in the world right now, who would you fight?” My answer is always the same. “Either Carson Daly or Fred Durst.” We’ll get to Durst later. For now, let’s focus on Carson “The Douche” Daly. I have wanted to fight him ever since Junior High. Laugh about it. I’m 100% serious. So serious, in fact, I’m going to issue a challenge to Carson here on the intertron:

CARSON DALY: NAME THE TIME AND THE PLACE SISSY GIRL. I WANT TO FIGHT YOU.

I know, I know. It’s silly to say things like that. Nothing will come of it. Not because I don’t think he’ll read this. He’s the kind of self-centered asshat that googles himself multiple times a day to see how often he ends up on the E! website. He’ll read this alright. I just know that he’s too much of a pansy to take a challenge. He knows I’d take him down in less than a minute, and not even because I’m a fantastic fighter (even though I totally am, thanks to lots of Mortal Kombat) or because he’s some sort of skeletor version of his former self. I’d lay the firm slap down upon Carson Daly because I would be fueled by a righteous, pure hatred, the kind of which that – were mankind able to harness its raw energies in some tangible form – could single handedly pimp slap OPEC into irrelevance.

Unfortunately, I’m not going to get the opportunity to physically vindicate the world by beating down Carson Daly, and so we’ll have to settle for making fun of him on the internet. We’re going to start out by amassing an encyclopedia of facts about our sworn enemy. This list will be updated frequently, and all are welcome to add to it. Treat this like a manifesto encompassing all the reasons that we as a community of good hearted, freedom loving Americans must unite against this evil, communist, douche bag of a foe. Here goes:

A baby once stole candy from Carson Daly. He started crying, so the baby gave it back and said his first word: “pansy.”

Originally the famous line from “The Sandlot” was “You play ball like Carson Daly.” It was changed because he started to cry.

Carson Daly has two speeds: “afraid” and “girl’s night out”

When a group of pedophiles wants to use a “below the belt” insult, they’ll call someone a “Carson Daly.”

Carson Daly’s birth helped inspire the legislation legalizing abortion. (as the saying goes, fool me once…)

On tax forms, Carson Daly is legally required to list his profession as “douche bag”

When Carson Daly “employs” a prostitute, she’s the one that feels dirty afterwards.

Somewhere in the world, a baby duckling dies every time Carson Daly smiles.

After Carson Daly goes to the bathroom, the toilet washes its hands.

When Carson Daly tried to sell his soul, the check bounced.

When Carson Daly pulls down his pants, butterflies come out and Cher starts playing.

When looking at Carson Daly through infrared goggles, he resembles a fully-splayed dog in heat.