Tiffany Thompson – We Interview Her 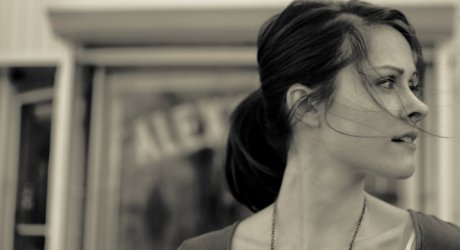 Having spent upwards of three years foisting the half-crazed diatribes we call “opinions” onto the unsuspecting internet community, we at The Talking Mirror have finally decided to acknowledge a world outside of ourselves. We’re going to start doing interviews! Interviews, we’ve discovered, are wonderful little things that provide us an excuse to do two of our favorite things: (1) talk to girls and (2) use colons.

We’re hoping to begin doing these on a semi-regular basis and by “semi-regular” we mean “as soon as Kent is able to track down Minka Kelly’s home address.” We’re also still waiting on a call back from Heath Ledger, but, in the meantime, we were able to score a sit-down (read: email exchange) with the supremely talented and ever gracious Tiffany Thompson.

Who is Tiffany Thompson? Well, first and foremost, she is a graduate of Wheaton College. That alone should be sufficient evidence of her excellence as a person and worth as an interview subject, but for those of you who need more (i.e. Moody graduates and Dutch people) we should also mention that Miss. Thompson happens to be a kickass singer/songwriter.

Those of you who follow our work here on TTM know that we don’t throw around endorsements like “kickass” easily, but Tiffany fits the bill. Since recording her first album while still in high school, Tiffany has worked tirelessly to improve her craft, and her growing portfolio of acoustic ballads and pop singles is already drawing comparisons to the work of Colbie Callait, Norah Jones, and Meatloaf. (Editor’s Note: Two of those comparisons were true. We’re not telling which ones.)

More recently, Tiffany has been maintaining a travel schedule that would make a flight attendant sweat. A quick scan of her website’s “Upcoming Events” section reveals upcoming shows in Maryland, Tennessee, Virginia, California, and even Budapest, which I’ve been told is somewhere in Arkansas. And at each stage and studio along the way, Tiffany is introducing her haunting vocals and searingly honest lyrics to an ever-growing fan base. Suffice to say, she has more Facebook friends than you do.

Tiffany hasn’t landed as many Sprite commercials and Timbaland remixes as some of her peers, but listen to tracks like “Please” and “Till That Day Comes” and you start to get the sense that it’s only a matter of time before a Thompson single is being covered on American Idol. So do yourself a favor. Visit her website. Like her on Facebook. Find out when she’s going to be in your time zone, and go see her while tickets are still less than $20.00.

You’ll thank us when you’re trying to talk down a scalper outside The Rose Bowl.

TTM: If you could have the career of any current performer, who would it be?

TIFFANY: Adele, because her first record popped with almost all solo writes and a true expression of her own voice; then her second record was full of amazing collaborations.

TTM: Would you rather be known as a Christian musician (a la Jeremy Camp) or as a musician who happens to also be a Christian (a la most Country singers)?

TIFFANY: I’d like to be known as a musician who is a Christian – a la Bono or John Forman.

TTM: The Black Eyed Peas…good band or greatest band of all time?

TTM: Are you still working a “day job” or is music your full-time gig now?

TIFFANY: Music has been my full-time gig since April 2011, and it is tough to make a living as an artist—to be sure! Most of the musicians I know have to have a second job to cover their expenses. It’s just the reality, unless you tour and sell merch all of the time.

TIFFANY: Well, I do demand that I have hot water for my Throat Coat tea bag at most shows. Lemon and honey are deeply desired as well. When I make it big, I’ll be sure to have a round of freshly squeezed lemonade for the whole posse.

TTM: Which of your songs is best suited to be the soundtrack of a flash mob?

TIFFANY: My new song “Your Home” has such a great groove and a killer bridge. For sure the song for a flash mob!

TTM: You’re now several years into chasing your musical dreams. Do you ever get discouraged as you pursue a career in music? Do you ever find yourself wondering, “How is it possible that Performer X (let’s say Katy Perry) has a huge record deal / massive summer tour and I don’t?”

TIFFANY: I question my voice a lot, wondering if I really have something to say, really have a good/different enough vocal. But since doing this full-time I have realized there are so many different factors that play into “success” that I am a lot more gracious with myself now. And I just want to work ridiculously hard and give it all I have. Then we’ll see when the Tiffany Thompson “Sparkler” tour happens. You can be a roadee. ????

TTM: Which rapper would you secretly love to collaborate with?

TIFFANY: It’s no secret, Lil Wayne would be amazing to work with. (Editor’s Note: Would you like to know the most gangster thing about Lil Wayne? He’s a Green Bay Packers fan.)

TTM: Looking ahead to the next 6 months, what are you most excited about?

TIFFANY: In early October, I released a new single–Let It Break Through–that I wrote and recorded in LA with Chris Franz. But this is not just a new single, it’s a multi-media song package including behind the scenes conversations with my co-writer, producer, and film-maker. Film-maker? Yes, please. There will also be a music video for the song, filmed and produced by Reuben Bucuresteanu. You can get the whole song collection on my website store and the single is on iTunes.

In November, I’ll be releasing another EP with LA based producer Phil Danyew. This project is a lot more electronic-pop, and goes a totally different direction then the October single. I’ll also have another single coming out in November that is much more organic.

TTM: John Mayer, Jason Mraz, and Justin Beiber. You have to hook up with one, marry another, kill the third. Who would get what?

TIFFANY: I think I’ll plead the 5th on this question. (Editor’s Note: Conor answered the above question as follows… “I’d hook up with all three of them and then find some way to kill Lady Gaga.”)

TIFFANY: Really? (Editor’s Note: That sounds like a “yes” if I’ve ever heard one.)