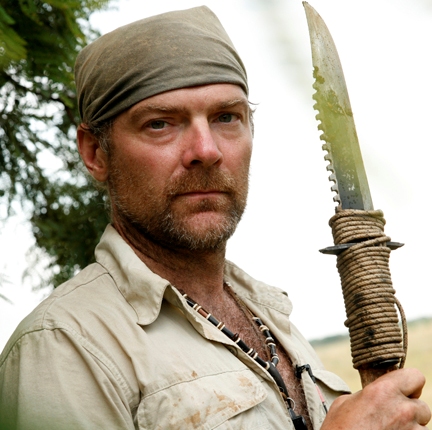 So. It’s day six. Only one more night until I’m finished with Papua New Guinea, and with the Survivorman project as a whole. I haven’t had a meal in five days and the creek water has given me alternating bouts of diarrhea and vomiting for the past 72 hours.

But the matter at hand: I have an unused package of beetle-nut paste that my local Malina guides gave to me in case of emergency. The Malina use the beetle-nut paste as a mild intoxicant. If used with restraint, it can provide temporary relief from extreme hunger and fatigue.

(Les opens a plastic bag and tips his nose slightly forward to smell its contents. He immediately recoils, and retches. After a deep breath, he takes a beetle-nut and places it in his mouth, then scoops an enormous glob of paste onto his fingers and slathers the inside of his lips.)

As you can see, these are the extreme choices you’re forced to make to survive alone. Some do it in groups, some do it with camera crews and staged wilderness circus acts. Thanks for sticking with me as I’ve tried to do it differently: again, trying to create actual, real-life survival scenarios that might some day save lives, not just score high viewer ratings while putting a vast array of filth into my body.

(Returns to describing the beetle-nut paste) Oh, I see. I think it’s working. My face is…almost entirely numb. (Touches face. Chuckles to himself.)

Les is giggling as he backs away from the camera and takes a seat. He passes his hand over his face in an attempt to go from hysterics to serious. For a moment it works, and his face is set in stone, then he breaks into hysterical laughing again. He composes himself, then shouts:

BEAR. BEAR GRYLLZ. (He giggles again. Then resumes serious:) It’s always good to know a colleague is somewhere out there watching, isn’t it Bear? Can I call you Bear? (Tries to effect a British accent but does Australian instead:) Is that fine and dandy, mate? (giggling) You know what I could go for, Grill-Master? Some barbecue! So Bear, why don’t you Gryllz me up some barbecue. Rack o’ lamb? Hind of steak? No, no, I prefer the loin, thanks.

(Breaks into hysterics. Then serious, shouting, in Australian accent) HELLO ROOM SERVICE? YES HELLO, IT’S MR. GRYLLZ IN ROOM #3A, I COULD USE A RIBEYE AND A RUB DOWN. IT’S BEEN A HARD DAY IN THE “BUSH” (Les makes air quotes with his fingers. Then starts karate kicking spasmodically and knocks the camera over.)

(Les has started a small fire with his guitar as firewood. His shirt is off, and he has braided little bits of grass into his happy-trail and chest hair. He is openly weeping.)
I’m not angry at you, Edward. Can I call you by your real name? Please? Men like us don’t get to have real names anymore. We get out there, in that urban jungle, and suddenly we’re nameless. Not like out here, not like out here where the bush names you, and defines you, and ravishes you. In the city, we’re just another two clowns in suits, Eddy. Out here, we’re artists. We make our bodies sing. Hell, we’re musicians, we’re —

(Notices for the first time that his guitar is on fire.) NOOO!

[CAMERA to black. When it returns, time stamp reads: 7:55PM]

(Les is calm. He is holding something in his hand. Puts a hushed finger to his lips.)

Shhhhh. I’ve got secrets in my hand, America. Do you know what my secrets are? Bear does, ‘cause we’re brothers. My secrets are jungle-sized, red-hot, fire ants. Yep. And this is how REAL bushmen do it. (Les ceremoniously stands up, presents the handful of swarming ants for the camera, then pulls the elastic band on his pants forward and flings the ants into his pants. He walks calmly over to camera, picks it up, and holds it directly in front of his face.]

See this, television viewers? This is reality TV. I’ve got ants in my pants. Put that in your canteen and drink it, you Discovery channel-watching, vicarious-thrill-seeking, exhibitionism-loving mother fu—

[Les drops CAMERA to the ground. In the background, we hear him screaming incoherently, mixed in with “Diana”, “it’s burning”, and various obscenities directed at the Malina people of New Guinea. Gradually, the screaming subsides. Les transitions into a rendition of Bob Marley’s “Buffalo Soldier,” sung in an Australian accent. Meanwhile, the dropped camera shows only the evening light reflecting darkly off the nearby jungle river.]

Photo care of The Discovery Channel