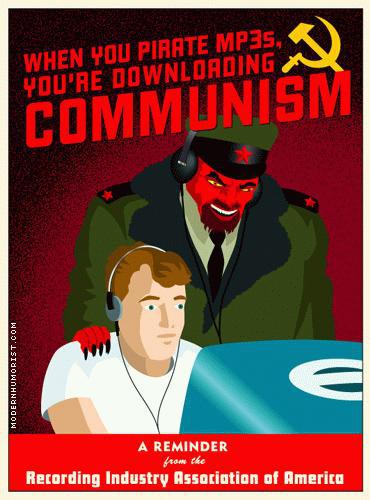 TTM Readers: This is an article that I wrote for www.gapersblock.com As our readerbase doesn’t really overlap very well, they allowed me the opportunity to post it on TTM as well. You can see the original article with all its comments here, on Gaper’s Block.

Hey there Chicagoans. Go ahead and pause all your Kazaa, Limewire, and BitTorrent downloads for a second. I want the page to load quickly as this is something you’re going to want to read.

If you haven’t heard yet, it’s “illegal” to download music online without “paying” for it. It’s hard to believe, but being a fan isn’t accepted as legal payment anymore. They call it “piracy,” and the consequences for it can be very, very dire. Therefore, I’ve compiled a list of other crimes that I suggest you look into before you decide to download “Sweet Child of Mine” or “Poker Face.”

First, let’s look at the fines in the only two music piracy trials that have taken place to date. The first is the case of Jammie Thomas, a single mother of four from Minnesota. She downloaded 24 songs off of Kazaa. A jury of her peers decided that she owed the RIAA (Recording Industry Association of America) almost $2 million for her crimes, a ruling which the Obama Administration recently told a federal judge was constitutionally sound. The second is the case of Joel Tenenbaum, a young grad student at Boston University. He downloaded 30 songs and was slapped with a fine of $675,000. If the verdicts stand both will file for bankruptcy.

I know. Yikes. I was hoping to commit a crime today, but $2 million? Damn. Don’t worry, my villainous friends. They may have foiled our evil plans to put Metallica out on the street, but there are plenty of other crimes you can commit here in Illinois that won’t get you a punishment even vaguely that severe. Here is a list of 7 ideas to get you started, but first we should make a few rules. Some of these “crimes” have imprisonment as part of their sentence. That being said, I’m going to equate one year of prison with a $50,233 salary which is the median household income as of 2007. I.e. you would have made $50,233 each year you’re in prison were you not becoming intimately acquainted with Wade, your cell mate.

That, of course, doesn’t factor in the cost of “freedom.” I tried to get into contact with Toby Keith to figure out how much freedom is worth in American dollars, but he was busy writing songs about how terrorists can kiss his ass or something. 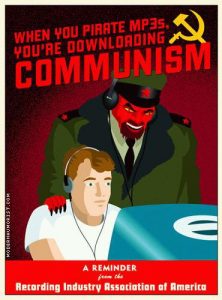 One final thing to keep in mind here: Obama promised hope and change, and he certainly brought it in the case of piracy and the RIAA. In between stints of walking on water and saving us from ourselves, Barack has appointed five RIAA lawyers to positions in the “justice” department, in addition to upholding the federal limit of $150,000 per instance of piracy.

Here are the sources I’m using for crimes and their penalties:
The Illinois Criminal Code

Charts of Crimes and Penalties:
First one
Second one

1. Steal Music? No! Steal a child, preferably from a recording artist.
That’s right, the fine for regular old, Class 4 Felony child abduction is $25,000. It can also include one to three years in prison. So, if you get spanked as hard as possible after ganking a silly named celebrity child, you’ll be down $175,699.

3. Rob Bryan Adams.
There’s Bryan Adams next door, tooling around on his new John Deere riding lawn mower. That would definitely make mowing the lawn easier huh? Fun, even. Can’t afford one, can you? No problem! Punch him in the face and take it! That’s a Class 2 felony. The penalties come to a meager $376,631, which is a full $298,369 less than even the weakest RIAA judgment.

4. Set Lars Ulrich’s house on fire.
Being a pyro sounds fun. You get to see lots of pretty flames, hear fun explosions, and watch things get destroyed. Plus, doesn’t Metallica have a song about setting shit on fire? They probably do, it’s Metallica. What could go wrong? Not as much as if you decided to pirate music. Arson is another Class 2 felony. ($376,631)

5. Stalk Reba McEntire.
Hang out in her front yard, take pictures of her driving and shopping, send her weirdo letters – you name it, stalking is awesome! And what’s the penalty? It’s just a Class 4 felony! Phew! Just about $175,000 and you’re done.

6. Learn from Michael Vick: Start a Dog Fighting Empire
Dogs are pretty cool, huh? You know what’s cooler than a dog? Dogs killing each other! That will get you a paltry $50,000 fine and one to three years in the pen. What does that amount to? A max of about $200,000! Not too big of a deal when viewed against the dire backdrop of music piracy, huh? Suck it PETA!

7. Murder Someone, Second-Degree style.
Basically all “Second Degree” means is that you were provoked in such a way that it would cause you to have an “intense passion,” i.e. you downloaded a few songs and then you were fined an amount that has more numbers than most of us will ever see in our bank accounts. When that happens, if you sort of go Incredible Hulk and shiv somebody in the kidney, you may be found guilty of Second Degree murder instead of first. Second Degree murder is only a Class 1 felony, rather than a Class X, which stands for X-treme. Class X is like the Mountain Dew of crimes. Anyway, a Class 1 felony can result in a fine of $25,000 and/or 4-15 years in prison. So, according to our numbers, you could POTENTIALLY only lose roughly $225,932. If you have a real bastard of a jury though – kind of like Jammie Thomas did – then you might get the full 15 years, which would amount to $778,495. So that’s worse than Mr. Tenenbaum, but still not even close to Ms. Thomas.

There you have it, my Chicagoan criminal friends. Stick with this list of crimes, and you’ll be able to satiate your devilish desires and still come out hurting less than a music pirate.